Relaxing Lockdowns: The Risk of a Deadlier Second Wave using the 1918 Spanish Flu as a Reference 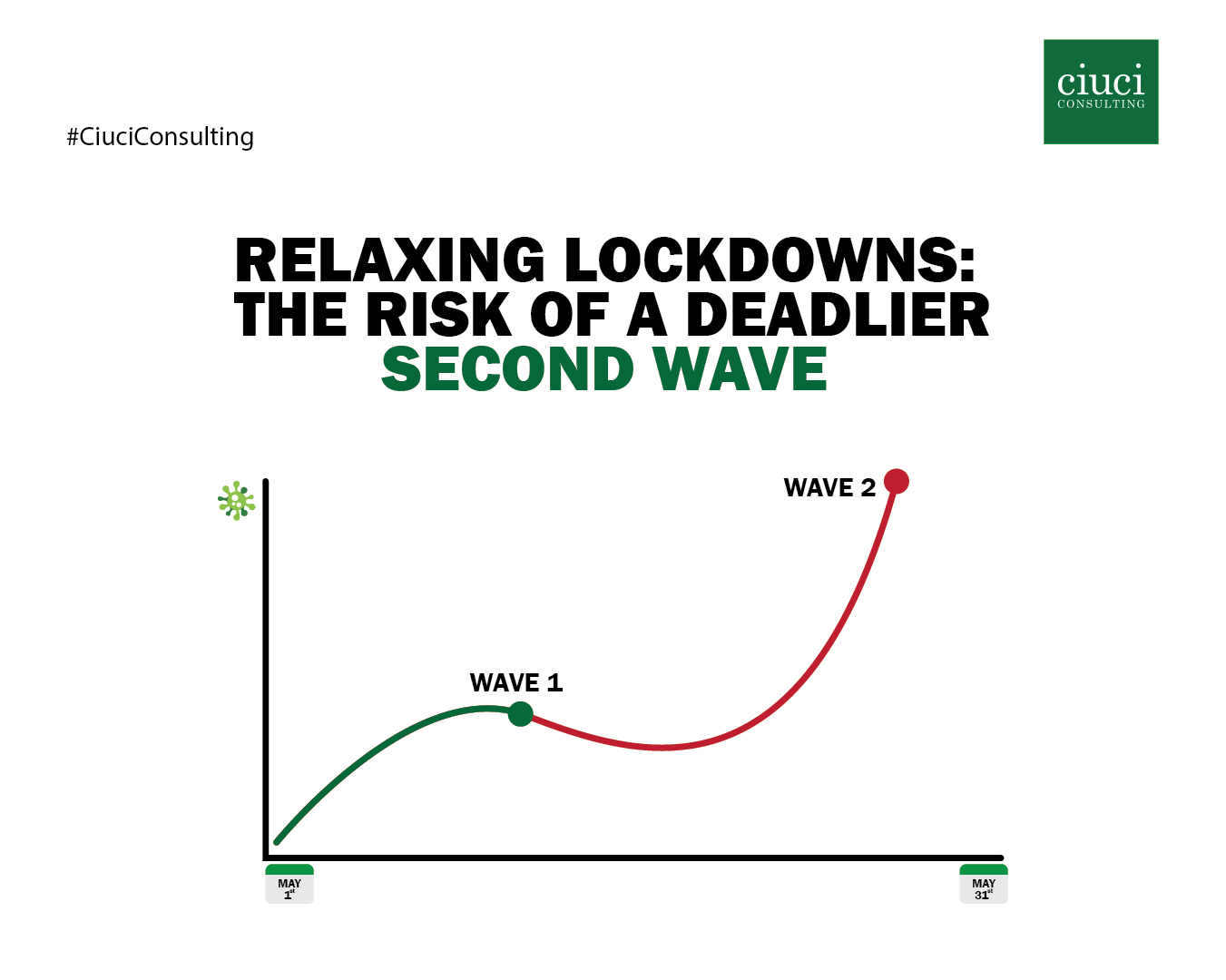 03 May Relaxing Lockdowns: The Risk of a Deadlier Second Wave using the 1918 Spanish Flu as a Reference

The Spanish Flu of 1918, which lasted for two years and infected approximately 500 million people worldwide has officially been named as the deadliest pandemic in modern history.[1] While the first strain caused by an H1N1 virus[2] was not particularly deadly, the second wave came with a vengeance.1

With over 3 million confirmed cases and about 1 million recoveries as at the time of this article,[3] the novel COVID-19 virus has caused governments to enforce lockdown measures in their countries in order to contain the spread of the virus. The Federal Government of Nigeria has also gone with this strategy, but the economic implications have been dire. This has led to the decision to gradually relax the lockdown under strict guidelines starting Monday May 4th in order to restart economic activities.[4]

While the global pandemic of 1918 lasted for two years, a significant number of deaths were recorded in October and November, 1918; the second wave of the pandemic.1 Reported cases dropped around July 1918, and there was hope at the beginning of August that the virus had run its course. In retrospect, it was only the calm before the storm. A mutated strain of the Spanish flu virus had emerged in Europe and had the power to kill a perfectly healthy young man or woman within 24 hours of showing the first signs of infection.1 In late August 1918, military ships left England carrying troops unknowingly infected with this deadlier strain of the virus. As these ships arrived in France, the United States and Liberia, the second wave of the global pandemic began with full force. The rapid movement of soldiers around the globe has been cited as a major spreader of the disease; the military had a system of moving lots of men and material in crowded conditions, and this was a major contributing factor in how the pandemic spread.1

This caused the death toll to hit a record 50 million people2 worldwide – of which 500,000 were Nigerians;[5] a figure estimated to be more than the soldiers and civilians killed during World War I.1 While the mortality rate of the third wave was just as high as the second wave, the end of World War I in November 1918 eliminated the conditions that allowed the disease to spread so widely and quickly. Global deaths from the third wave paled in comparison to the monumental losses during the second wave.1

While the novel COVID-19 virus is about to hit the five-month mark, it has ravaged all continents in the globe save Antarctica, with global death and recovery rates at 7.12% and 31.53%,3 respectively as at the time of this article. Wuhan, the first epicenter of the virus led the way in the enforcement of lockdown measures in order to contain the spread of the virus.[6] The lockdown system was later adopted by other countries, coupled with social distancing measures designed to limit human-to-human transmission. In Nigeria, two states – Lagos and Ogun as well as the FCT were placed on total lockdown from 30th March following a directive from the Federal Government. This lockdown has lasted for five weeks,4 and has caused the shutdown of businesses, except those in essential sectors like healthcare, and food supplies.

The lack of quarantine and underdeveloped healthcare systems allowed the Spanish flu to spread in 1918.1 History has shown a few similarities when it comes to pandemics in Nigeria. For example, the Spanish flu was introduced into Nigeria by passengers and crews who arrived from overseas;5 this was the case with COVID-19. Lagos, Abuja and Kano – three densely-populated regions of Nigeria – account for about 70% of COVID-19 cases;4 similarly, the over-crowded urban centers in Nigeria were the hardest hit by the Spanish flu.5

Unfortunately, these are both issues Nigeria could likely face from May 4th when the lockdown will be relaxed. For example, The Nigeria Centre for Disease Control (NCDC) has stated that there is a real shortage of test kits[7] which means that the true count of those infected has not yet been uncovered. The Lagos State Government has commissioned five isolation centres with a bed capacity of 558 meant to serve more than 750 active cases in the state;[8] facilities that will be grossly insufficient given the directive to ease the lockdown. This is coupled with Nigeria’s already ailing healthcare sector, which cannot handle an explosion of the virus given the realities on ground.

Despite the fears and concerns, the Federal Government is relaxing the lockdown based on strict restrictions in order to reduce the hardship so many are suffering and resume economic activities. These restrictions include:

While this directive by the Federal Government has been welcomed by some, others are concerned as Nigeria has recorded almost 1,000 cases in a week – between April 23 – 30th,[9] with total cases close to 2,200, deaths almost 70, with about 350 recoveries as at the time of this article.[10] This has made Nigeria the most impacted nation in West Africa, and 5th in Africa.9 The concerns that have been raised is also due to the fact that within days of relaxing its lockdown, Ghana recorded a 24% increase in its coronavirus cases.4

The Federal Government has stressed that this is a phased process, and that the level of compliance with the aforementioned guidelines will be reviewed after 2 weeks before additional guidelines are issued.4 While the government has started to gradually ease the lockdown for economic reasons, and to reduce the hardships of the lockdown on Nigerians,4 individuals and businesses need to completely abide by these guidelines while proactively taking the initiative to prevent all unnecessary movements and stay at home as much as possible. Remember, history is written so we can learn from it.